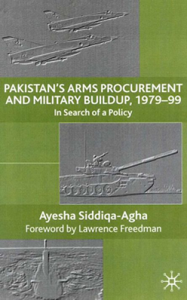 The strategic imperative is held as the primary explanation for Pakistan’s military buildup. This book presents a fundamental departure in presenting an analysis of the internal dynamics of defense management and decision-making in Pakistan – a new nuclear weapon state. This is an in- depth study of Pakistan’s security link with its arms suppliers and defense industrial capacity, and the influence of Pakistan’s Army on conventional and non-conventional defense decisions. The analysis is backed with numerous case studies of defense decisions carried out from 1979-99.

There is no comparative book which provides details of the decision-making structure at the level of the government and the three services of the armed forces, an assessment of cost of military buildup, and detailed analysis of how different stakeholders negotiated with the decision-making structure and amongst themselves to buy various weapon systems.

“…an intriguing study of Pakistan’s defence and security…a brave and informative book.”