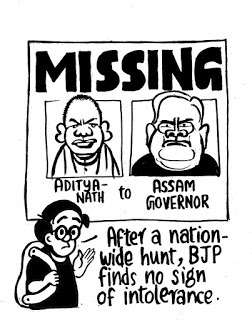 Was it even possible for Pakistanis to think that their space to speak and express themselves will be curtailed so much that speaking would become a matter of life and death? I am a generation that saw both the enforced silence under Zia and the ‘glasnost’ and ‘prostriaka’ of the later years. Having survived the decade of the 1980s, many people amongst the intelligentsia were eager to talk and vent their frustration. And people did talk and express themselves.

In fact, one thing that was great about being in Pakistan was undefined boundaries of state censorship – if you wrote in English, academic journals and newspapers abroad, or English newspapers no one really bothered you. Not trying to sound ungrateful for these small mercies because that put the countries record on freedom better than a lot of countries in the South Asian region. This is not to argue that pressures weren’t there; personally I was ostracized and chucked on the margins of academic life after writing the first edition of my book Military Inc, but there wasn’t a blatant effort at hounding someone like me. Except for a couple of months in the summer of 2007 I lived in Pakistan and continued writing. Little that it matters to today’s social media geek but it is important for me to remind people that since my Ph.D. is in War Studies and my expertise was military that is what I wrote about. Once when I tried to write something else I was reminded by the editor of Dawn that my expertise was military and that is what I should focus on.

I am part of a class of writers that you could call ‘elite’ writers. Our reality was for a long time disconnected from those that tried to voice similar views in Urdu press and media and would get hounded in return. The reporters who try to report the truth and were killed for it. In Urdu media it was almost impossible to stray away from the ‘party line’ which basically means dominant political and social narrative. The Urdu media was probably disciplined after the fiasco in 1956 with Ibn Saud who was so angry with an article in the Urdu press against him that he was ready to recall his ambassador from Pakistan. Iskandar Mirza had then assured the Saudi ruler of appropriate action.

But many years later, some thing happened to have impelled the state to impose similar curbs on English press that, thus far, was viewed as free. Post 2010, something bagel to change. There were greater restrictions on English media. Since there was no English language television channel so we are strictly talking about the written word. The pressure from the militants is understandable since there were several attacks on the press that forced many papers to be cautious about religious-militant groups. However, curbs were introduced while discussing the military which was the first time that it happened. Apart from Dawn that was kept as a flagship for freedom of press in Pakistan others felt the crunch. To be fair, it was each according to its capacity. The Express Tribune was the first to sink. The paper, which had once carried my review of General Kiyani (https://tribune.com.pk/story/5159/a-man-of-destiny/) was no longer ready to print anything about the military or his successor. This went hand in hand with expansion of military’s media and mind-control empire. It is not just about the ISPR or the ISI but the SPD, the army chief’s office, the head of the ISI, etc. According to a research paper by Huma Yusuf and Emrys Schoemaker (http://downloads.bbc.co.uk/mediaaction/pdf/bbc_media_action_pakistan_policy_briefing.pdf), the two pressures on media were militants and military. (I have explained in greater detail the purpose and method of mind, media and narrative management by the military in the 2nd edition of my book Military Inc).

The years 2012/2013 were watershed years when a gradual clamp down began on freedom of expression without anyone explaining to unsuspecting people what was happening. While some relate it to General Raheel Sharif, in reality this shift was a policy change at an institutional level. The army chief may have contributed to the policy but this was certainly part of a broader decision that screws had to be tightened. So, on the one hand, technological advancement opened greater avenues for people to speak and voice their concerns about policy and state. This was nothing odd given that Pakistan has always been a restless society due to disagreement over conception of various groups regarding the social contract with the state. The ethnic divide is a real issue that does not necessarily threaten the state but is an issue that requires resolution. There are separatist movements but none is so strong to break the state, especially after 1971. Yet the state is paranoid about such movements. Then there is the less threatening issue of sectarian divide that probably adds to the stat’s insecurity.

But on the other hand, after 2013 we started a buildup of crackdown on dissent. While the clamp down in Baluchistan or Sindh followed the traditional pattern, a new shade was added this time. The state and its powerful institutions began to also target those that critiqued the state in the hope to bring improvement. These are people invested in the country and have no desire to see it disintegrate. People increasingly termed as traitors, picked up, made to disappear, or simply killed. This was a kind of intolerance that was never experienced in the past couple of decades after Zia. Not to forget people that were targeted through state proxies. In many ways, Zia’s period was comparatively better because it was state that punished. After 2012, it could be anyone’s guess. Such growing intolerance is not tactical but strategic and in many ways similar to the RSS and BJP under Narendra Modi. India and Pakistan, in terms of strategic design of discourse management both look similar. One is trying to firm up Hindu identity of its state and thus targeting minorities or turning any dissent into minority voice. The other seems to copy. But in the process both states are targeting freedom of speech and forcibly framing the thought process in a certain way.

Interestingly, while liberals in India can claim that they have just begun to experience such curbs and repression, what might give them some comfort is that their counterparts in Pakistan are not in a different situation. We had forgotten about General Zia’s black days and nights that have now returned to us with greater ferocity. For those that could speak and thought they had the freedom to do so have woken up to a different reality. Guess in over twenty years, we in Pakistan forgot what Ziaul Haq was all about. Now he is back knocking on our doors – mothers tell us to keep quite lest we disappear in the middle of the night.