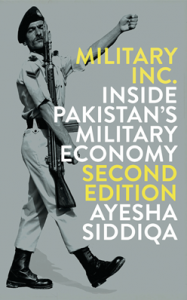 This new edition brings Siddiqa’s account fully up to date with a new preface and conclusion that emphasize military’s control of the media.

The book adds to the existing literature on civil-military relations beyond Pakistan by arguing how modern day professional militaries do not necessarily need to do a coup d’état but can displace a civilian government conceptually and make it ineffective by taking control over governance and interfering with day to day running of the state. Thus, returning to the barracks or staying outside turns into a broader metaphor according to which unless there is de jure control of the military by a civilian government we cannot imagine the military to not be in power. The military like Pakistan’s, which has altered rules of the game of power, will also use media as a technology to build its reputation and morph the national narrative in a manner that would support the defense establishment’s control of governance and the state.

A Political Ponography? This is of Pluto Press Reviews

“Complex, riveting, absorbing, Siddiqa has written a vitally important book which enhances our understanding of the army on the front line in the war on terror.” Ahmed Rashid – Far Eastern Economic Review

“No one else has so comprehensively [explained] the army’s involvement in Pakistan’s economy, nor linked it so clearly with the army’s growing and seemingly permanent role in Pakistan’s politics.” – Stephen P. Cohen, Senior Fellow, Foreign Policy Studies, Brookings Institution